“This week’s meeting in Zagreb demonstrates the EU Bank’s close engagement with Croatia. May I thank Prime Minister Andrej Plenković, Finance Minister Zdravko Marić and their colleagues for their warm welcome and for Croatia’s valuable support for the EIB. Here at our Board in Zagreb we approved EUR 7 billion of new investment that will improve homes, reduce carbon emissions and enhance education, healthcare and business growth.” said Werner Hoyer, President of the European Investment Bank.

The EIB Board of Directors’ met in the Croatian capital Zagreb ahead of the Croatian Presidency of the European Union and approved EUR 150 million of new support for agriculture, tourism and manufacturing investment by companies across Croatia.

The EIB agreed to support construction of a new 94MW wind farm in northern Poland, financing for small-scale energy efficiency and renewable energy projects in Cyprus and seven solar power plants in Morocco.

The Zagreb board meeting approved more than EUR 1.4 billion of new financing for transport investment.

This includes upgrading trams in Amsterdam, metro trains in Barcelona and urban transport in Szczecin, as well as new investment to expand electric vehicle charging across Italy and support for digital and automated transport research.

The EIB also agreed to finance expansion of Finland’s main airport in Helsinki and construction of a new airport on the Greek island of Crete in Heraklion. 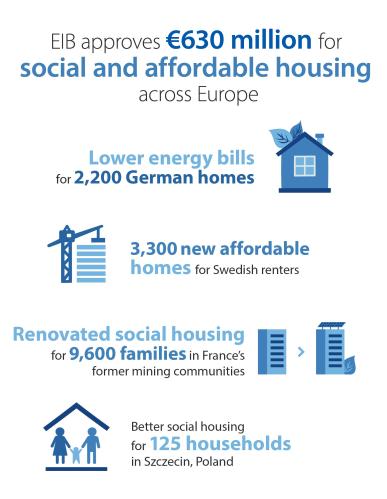 Patients in Austria and the German region of Brandenburg will benefit from new EIB investment in primary health care centres and hospitals.

The EIB Board also agreed financing to expand research at the Greek National Centre for Scientific Research and the Polish Science and Research Centre. The EIB will also support renovation of the Paris headquarters of the United Nations Scientific and Cultural Organisation, UNESCO, and construction of kindergartens, primary, secondary and vocational schools across Montenegro.

The EIB board agreed to support two PPP projects. These involve construction of the A49 autobahn between Schwalmstadt and Ohmtal-Dreieck in Germany and road safety investment on the Via 15 motorway around Arnhem, the Netherlands.

Ten projects approved by the EIB board today will be guaranteed by the European Fund for Strategic Investments (EFSI), the financial pillar of the Juncker plan.

Don't miss any of our R&D calls.

13/02/2020
The European Islands Facility NESOI launched the #NESOIsurvey to identify islands’ needs for the energy transition
With the goal to mobilize more than 100 M€ of investment in sustainable energy projects across the EU’s populated islands, NESOI calls the communities of the European islands to assess their needs.